"I don't know what these cops are doing. Fucking assholes." 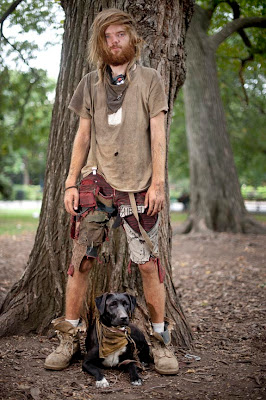 I got a hundred dollars from Denzel Washington in Venice Beach, California. In my first month traveling. It was really cool. Like the day before these kids jumped me. Kicked me in my face. Took all my money. So that sucks man. Actually he was really cool. Pounded knuckles with him and stuff. Talk for like five or ten minutes. He was really nice.

I don't know what these cops are doing. Fucking assholes. I've met cool cops, I mean. A good majority that I met do suck but there's a lot of cool cops. I can't hate on them.

Like today we got caught at our squat where we were sleeping and the cops they just, "they're like I don't care what you do. Just leave. Just don't ever come back." They didn't even care so. Under this bridge. Under the Williamsburg Bridge. In this big fenced in area. They didn't say anything really. They just told us to move. So really really can't hate all coppers. Those cops seemed like assholes a little bit.

I guess they were down there shooting up. Cops walked up on them. Just busted them. Yeah kicked them out of New York. It's crazy. I'm surprised they didn't take them to jail or anything. Anywhere else. It's crazy out here. Up north it's crazy. In Texas, that type of stuff don't go. Certain towns. They'll either like, if you were to talk back to them, like certain towns, like Austin or something they would definitely try to rough you up a little bit. Or would have definitely took you to jail. Yeah they definitely got lucky on that.