"Tried living in a house a few times. It's just garbage." 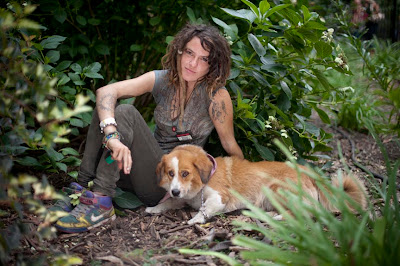 I did a little bit of modeling just for fun and cause like people were asking to take my pictures. If was fun though definitely. Taking pictures for money. It's a good deal. Win win.

I've been on the road, this is my fourth year. But on and off, you know I tried going back to school. Tried living in a house a few times. It's just garbage. It doesn't work for me. I windup getting into way too much trouble and or just going insane in my own brain cause I can't handle all that bull crap. Like having to do stuff for people, like having to feeling the necessity to do everything. Make money. Stress. Too much stress. Like people trying to tell me what to do all the time and what you're supposed to do rather then what you want to do. And I'm not like, when you're younger you think it's supposed to be like, all that like teenage angst and everything or whatever. But once you're not a teenager anymore, it just becomes like part of life that you wanna get away from, all that crap cause it just makes you crazy. It makes people wanna kill people.


And my friends are awesome. People on the road are awesome. Life; you get to live it like one step at a time. In our lives that we live; we live day by day like every second is fate and it's like happening right in front of us. Like we don't have anything. We don't have anything we need or want, we just kinda like go around and just like, it falls into place. Manifestation. I'm sure you've heard about manifestation. Wanting something and then like, knowing that you're going to get it I guess. Like knowing it's going to happen and then it does happen. Knowing that you're not going to go hungry. You can't go hungry. So you're automatically going to get fed. Knowing you're going to have a place to sleep. You're automatically going to have a place to sleep. Like a lot of people think that it's scary but it's not even scary. Cause it's like, fuck.

Cause none of us try. But look at how happy we are. How we just get to like; we get everything, we get everything. It's not like we're asking for everything. Boom. I don't know how to explain it. I don't know how to explain it other then that, if you know what I mean. It's like cut into the ground already and we're just falling after it. I just feel like this is my job. This is like my job, when your job is to do what you do. The president's job is to do what he does and you know everybody's got a job and maybe mine's not one you get paid for but it's still a job. I get to go around and meet everybody and talk to people and tell them about, about this and I don't know. I feel like it's my job. I dunno.

I do. I do get paid for what I do. You know what I mean. I get paid, just because people don't understand me so automatically. Automatically when you think like someone is in trouble, you offer them money. It's like the world just doesn't understand us. What you don't understand your either scared of or you just like. That's why I think everyone's scared of us. They just don't get our life is completely different, But yes we should get paid for it and I think we all do. And that's why we keep doing it.

Confusion, fear, anger. Mostly confusion. Then second anger and then third, like fear kind of. Cause like the angers like, Ifd feel like probably like sixty percent of people wished they had done this themselves. At least went out, not necessarily what I do because I've been doing it for four years right. But at least when I got out of high school and stuff. At least like wished they had went traveling and seeing the country where your born in, where you've grown up your whole life. Like I don't watch the news but I still know what's going on. And I'm not scared because I am like the news. I get to see what's really going on. Even though I don't get to hear about huge things like shootings and stabbings, do I want to surround myself with that kind of information all day? Do I want to live in fear every single day? Not particularly. I'd rather just like go, be smart, be safe. You know what I mean? And you definitely have to be smart to do what we do, even though we might seem like a bunch of dumb ass people because we like to have fun and whatever but. You have to be smart otherwise your going to wind up another headline in the news. I wouldn't change anything for the world. But I wish people would realize we're not here to hurt anybody.