"When it comes to the concept of modesty, fuck modesty!" 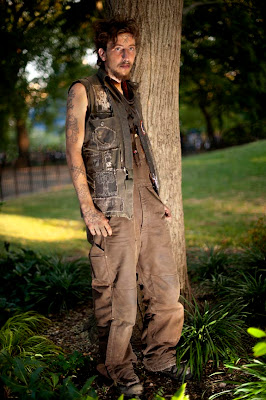 Basically, you probably won't be able to tell by looking at me, but I chose to live the lifestyle of a transient and a vagabond based upon on all my studies that I've done at school. I went through three years of philosophy and history. I went through three different majors. History, pre-law, criminal science and uh an english major. I've been on the road like this for three and a half years going on four. But I've only been really hopping and leaving my home state for about two years now. It's hard to explain exactly what happened when I decided to go on, like decided to just stop living and corresponding with real society but it probably had to do with getting kicked out of my last college when I was majoring in pre-law. I was going into constitutional law and criminal justice. I was gonna be basically the public defender. I was shooting to get public defender and environmental law. I was doing really good in school. Actually I had really good grades and all of my teachers that I worked for their classes loved me. But I didn't get along with the religious department and I didn't get along with any of the security. One day when I was wearing my old vest that had a giant fuck you back patch on it and a bullet belt security cornered me on school and said that I wasn't allowed to dress on school the way I was dressed. I wasn't allowed to speak my mind. And it came to me like well I'm paying what twenty five thousand a year for an education in a system where they don't even respect who you are. I'm not going to take that bullshit, fuck them. So I grabbed my shit. Walked to my teachers class and said, "thanks to your security guards I'm dropping out of school." And I turned my back and walked out of the classroom. I haven't stopped learning. I mean every day I'm picking up a new book or studying some new oddball fact. Like my old road dog Trashcan used to call me Infidel. Because I was one an infidel because I would always go against the grains of society. Because I was fucking smart as shit and I had this random like knowledge that no one else would, no one else would actually think to learn or study. I could come up with some random weird ass fact to any quote that they would do but if you asked me how to fix a car. You ask me like numbers or science I don't understand those. I'm dyslexic when it comes to numbers I guess. But when it comes to philosophy, when it comes to history, when it comes to common sense, when it comes to surviving. I'm pretty, I'm pretty smart when it comes to that. And when it comes to the concept of modesty, fuck modesty! Know who you are and be as bad ass as you can fucking be. And if you know that you're a bad ass, just fucking say it and just be ok with it. Don't gloat about it but be like you know; yeah I know that. I'm good. I know what I'm doing and I'm good like that. Yeah it sounds cocky. It sounds arrogant. Sometimes you just got to be an asshole to get by.

You know I don't have a house. I don't want a house. I see no reason to have to pay three hundred thousand dollars or more for the rest of your fucking life for four walls and a roof. I got a sleeping bag, a tent and a dog and I'm probably warmer and happier in that then you are in your comfy house with your tv.

There are two dogs killing each other at the moment in the dog park.