"Honestly I think it's the dope. People are strung out." 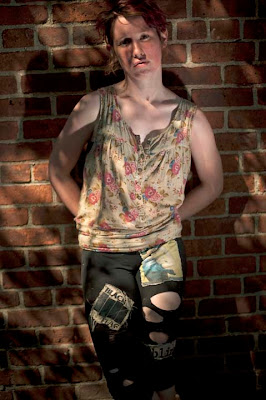 I pretty much been homeless for a long time. I squat a lot in Brooklyn, Manhattan, everywhere. I'm ready to go to Vermont in like a week and try to do like some political stuff out there. People just aren't excited anymore around here. I think people just have a lack of passion. People you know that you met on the street used to be like your family. And now it's not like that. People are all about themselves. They rip you off and don't even care. It sucks. Your best friend will steal, like rob you blind. Honestly I think it's the dope. People are strung out. I've lost like five people this year from heroin. I've been doing heroin for about five years. I'm cutting down and stuff. It's a struggle. Like your best and your worst enemy wrapped into one thing. It's like that one little comfort, even if you don't have a place to sleep, you don't have any food in your stomach, you're miserable, it's wet and raining, at least it gives you that inner warmth, that happiness you can't get from anyone else. I've never had that kind of happiness before. I've never been genuinely happy without it.