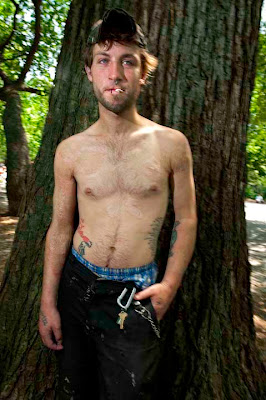 I'm infamous with street kids around the country because everyone thinks they have to know somebody to be somebody instead of just making their own individuality.

We had to shoot up outside because there was no light inside the squat. There's no windows, it's all boarded up. Apparently I was shooting up underneath the lightbulbs and there was a steam hole, like a manhole with steam coming out of it right there and I overdosed on top of it. Honestly if I had been there more then a few minutes, I'd be dead. Somehow the police showed up, put my friend in handcuffs. The ambulance came and took me to the hospital. I had six surgeries.

Also right after that, my friend just went to prison, his girlfriend went to jail too. She came out and overdosed the day she got out and my other friend came back to Michigan and overdosed on his moms couch the next week. So I missed three funerals and I almost died all in a month.