"A cop rode up to me on a horse and clubbed me on the top of the head." 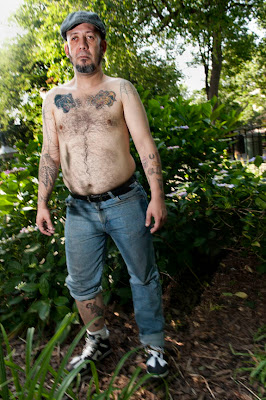 I've been hanging out in the Lower East Side especially Tompkins Square Park for a little, almost thirty years. One of the most memorable nights that I remember is the night of the riot. At that time in my life I was working from Monday to Thursday in Queens where my actual home was and from Thursday to Sunday I would sleep here in the park in Tent City. Tent City was a collection of cardboard boxes and shacks that, I'm gonna say we put together to live off the street. We used the electricity from the light poles, so we had our little TVs , hot plates and ovens, so it was a regular little community of castoffs, drug addicts and misfits. Well the night of the riot I went over to 6th and B. There used to be a deli on the corner there that sold coke. I went to cop some coke and when I came out of the deli I saw a bunch of police lining up. And what they were doing was they were um taking their badges off their hats and they were putting on riot gear and putting tape over their names and numbers. As soon as I saw it I started running towards the park. A cop rode up to me on a horse and clubbed me on the top of the head and when I woke and came around the corner the riot was in full swing. Police were beating people up in the middle of the street over on 7th between A and B. And they were going insane. They were tearing up our houses. They were tearing everything apart. They brought in a bulldozer and bulldozed all our stuff. It was supposedly part of a cleanup. But I was never able to figure out how you can clean up one area of the park by dispersing everyone that lived in that area all over the neighborhood. I ended up living in what is now the community garden on 5th street and Avenue B. I ended up living there with fourteen of my friends.