"Lose the baby and I lose myself." 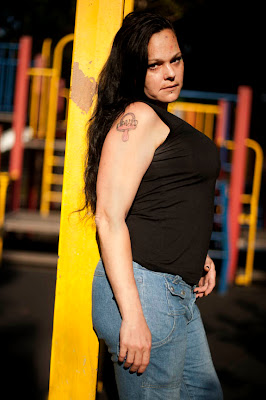 I just had a baby six weeks ago. His name is David Joseph. I call him DJ. I never knew what love was till I had him. His father is Eddie, Mad Dog they call him and I met Eddie three years ago in the park. He's missing in action and I gotta say it hurts but hopefully he's getting his shit together somewhere. I heard he was drunk in the park and they called an ambulance on him. Maybe he's in a psych ward or something. All I gotta concentrate now is on my son and getting my shit together and doing the right thing and loving him and being with him. That's all that matters.

Drugs. Not giving a shit. Coming and going. Wherever I laid my head was home. And didn't really have any real friends.

Right now he's in the hospital. I'm going to get him actually. He's in the hospital because I was addicted to Klonopin and I had to go to detox to get off of it. While I was in detox, he had to be detoxed. Which is very sad. But thank god he's healthy and beautiful.

I'm clean. Totally. Went to detox and made a decision and stuck with it. If not I lose the baby. Lose the baby and I lose myself. I'll get it together. I know I will. I'm a strong person. I've been out here a long time. I've fallen and gotten back up. Fallen and gotten back up. I was sticking anything in my arms. Now I'm totally clean. Never thought I'd see that day. Never thought I'd see my age.