"I don't see myself ten years from now living in a cardboard box." 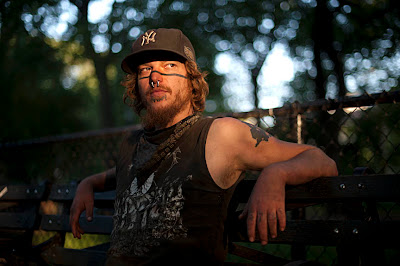 I'm getting really sick and tired of these younger groups of crusty traveling kids that are completely utterly violent for no reason. When I first started traveling, hoping trains and shit, when I was eighteen, I'm thirty four, well I'll be thirty four in October it wasn't always like that, it was completely different. Everybody rode trains and everybody was cool with everybody else. There was some violence but it was like outside. It wasn't like inner scene fighting. It nearly as violent as it is now. It's just utterly fucked up. I'm just getting so sick and tired of being around other kids. Like a bunch of us went to Deathfest in Baltimore. Pretty much it was just like all of us like here in the park but like a hundred times more. There were like people fighting with each other and like breaking bottles over each others heads. The violence is just too much.

It's more unstable kids from an unstable background. Coming into the scene and traveling and shit like that . Alcohol for sure. When you're putting yourself out there on the street and everything else like that you have to be subject to some kind of violence. That's just how it is. Unfortunately it's just all inner scene violence.

For some of us this is all that we have. It's all that we know. Some of us don't give a shit. It's like the only way to live. But the again I look back. Getting a job and working like nine to five and paying bills and fucking paying rent and all that. It's just mind numbing. It's just boring. It would be really hard to change, you know. From doing like a one eighty from like doing this to like getting up in the morning, going to work. All that shit. It be, not culture shock. It be stressful. It's completely anal.

I don't see myself ten years from now living in a cardboard box. Drinking fucking hooch down by the railroad tracks. I mean I don't want to be a home bum. I'm not gonna be that home bum. Someday I'll do something. I just don't know when. I'm not gonna be a home bum, dude you know living under some fucking bridge when I'm like forty five years old.

It's a way to live, definitely not a way to die if that makes any sense.