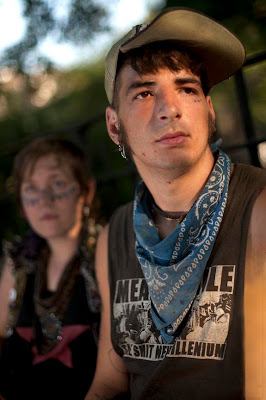 Sixteen. I dropped out of school. I thought I had a kid on the way. This girl moved to California and I was talking to her and stuff and it turns out I didn't have one. She just told me that so I'd freak out. And I dropped out of school and I had a job at McDonalds, like eight months. And I'm was like what the fuck am I doing. I'm not making a living.

I used to hitchhike a lot. I had a dude pull a gun on me when I was hitchhiking. I freaked out. Grabbed the gun. Grabbed his wrist like this and he shot up into his own ceiling and I started punching him in the face frantically and grabbed the car and turned it on the side of the road, stepped on the brakes and pistol whipped him and threw his gun into the woods, took my shit out of the back of the truck and took off.

This year I just been an angry crazy person all year. I've been traveling so long I feel like my mind is slipping from me. I feel like every year I do this I feel like more and more crazy. I don't feel like I can't hold down a normal job anymore.

I don't know what I should do. Should I go kill myself? Should I go kill someone else? Should I start robbing people? Should I get into some crime shit? Sometimes I feel like I'm crazy. I dunno. Maybe living in jail is way easier then living in the real world. I can get three hot meals. A place to sleep you know. Of course you'll probably make some friends.