" I don't need to get high in the woods. It's an escape from reality."

I've been on the road for a couple of years off and on. I find that I'm mostly drawn to like the outdoors, living outside, being one with nature. I decided to go to this school called Tom Brown's Tracker School which is like, he's a famous survival guy, guide like writer. So I decided to go there. Learn a little bit more about survival skills. How to be self sustainable and live in today's world. I learned different ways of fire making, different primitive shelters. It has a spiritual aspects as well. Tracking. Old Apache ways of tracking. I learned different ways to make food. How to survive off different circumstances and climates for water. Urban survival. I took this class surprisingly in the Pine Barrens. That's where he grew up. That's where he decides to hold most of his classes. I'm doing it because I want to bring people back to our mother. I want to bring people back to the earth. 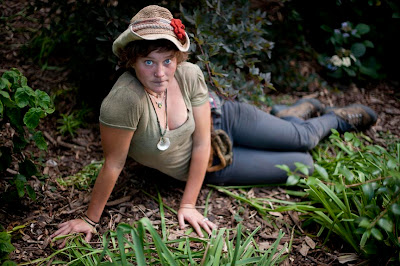 But this is a survival situation. Learning how to survive in these circumstances. I've never been to Manhattan. It's good to see it.

I fall in and out of that. Every once in awhile. I've had drug problems before. I definitely think that there is a large possibility that's something that I do plan on working on is bringing people out into the woods and trying to get people off their drug habits or bad habits in today's society and bring them a little bit closer to the earth and be able to help them find themselves. Their real selves and be happy with their lives. Hopefully turn around and do the same thing again with somebody else, you know. It's been successful for me. I know it's definitely successful.

Oh yeah. Heroin, meth, lots of drugs. I've been like two years getting better. That's what helps me the most. I don't think about it when I'm there. I don't need to get high in the woods. It's an escape from reality. Then when you're out like, why would I want to escape from this. You know. It's so beautiful.