"They call it, "goodbye lulu" man, throwing kids off the train."

I'm a grown ass man dude. I'm a carpenter. I used to make twelve fifty a week. I was ready to buy a house. We voted in a liberal president! I'm a train bum. There's three rules to riding trains. You can die. You can die. Don't get caught. I'm dropping science y'all.

Smoking meth in Tijuana with a hooker. Boned her, got robbed and it cost me four hundred bucks. I'm a train bum, like a hobo, my other brother is a pro skate boarder and my youngest brother is a mortician. 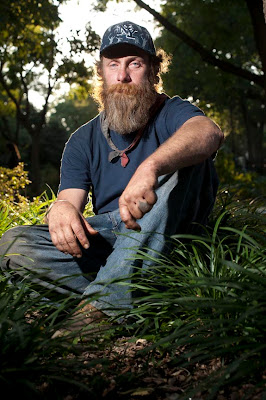 I'll probably die of alcoholism. I only drink beer, but I don't know. I'm not going to guarantee my demise. Sometimes I don't feel so right here. Thirty seven. Yeah it's hard core man. No I'm just getting started. The guy that give me my name is like in his sixties and he's got a freight train tattooed on his forehead. I'm just getting started. I ride the sunset. This is my first time in New York but I mainly ride the sunset which is LA to New Orleans. But I go up north too.

Box car, grainer, grainer porch, ride the unit. Whatever you can get. There's many many rides. And really it's boring. No it's actually difficult to find a ride. You pretty much gotta like just wait. Wait and watch. Watch and wait. No it's easy too. It's not like I'm in a yard showing you how to do. Just talking about it. Train rides hard core. All the way hard core. You can die, you can die, don't get caught. If the first two rules is you can die you can figure it out from there. Thirty six inch steel wheels, bulls, other crazy hobos. They call it, "goodbye lulu" man, throwing kids off the train. I've never seen it, never been involved, but I've heard stories. It's evil man. You get out in Utah and shit or Mexico too. I wouldn't ride in Mexico without a pistol on me.

Let it be. Enjoy. Time is the most precious thing you have. Enjoy every second you're given.