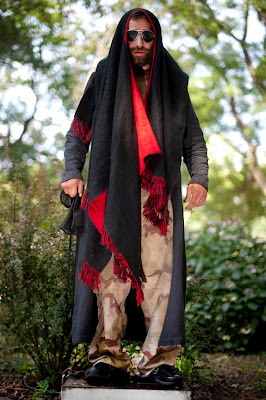 Between ninety one and two thousand five. I went into war. First the gulf war, in ninety one, Fort Jackson. Where I graduated top ten in my class. Then from there I went to Afghanistan Desert Storm and everything. Been to Somalia, Bosnia, Kosovo, Panama. I've rescued POW's and MIA's. So that's my job. Yes for ten years I was POW, MIA myself. I was the one who helped get Michael Durant out. The one that was POW, MIA in Somalia. I'm the one that actually helped, well, wasn't actually the one. Lets say I helped get him out. Lets put it that way. And you have to understand what I did at the age of eighteen going in through what I did to survive. Get done up by a tank explosion thirty yards into a brick wall, head first. Far from the line about four stories down, landed on my back, messed up my back. Still went through the military because at the time I was fine. Got shot ten to twelve times. Then I jumped on a grenade and the marines come and got me. I jumped on top of a grenade on my stomach. See I'm half robotic. Titanium, steel alloy that they make in space shuttles. That's what I got inside. Kinda like Arnold Schwarzenegger. Also my left arm is also mechanical. From waist all the way up is mechanical. I'm kinda like, basically a cyborg. Almost.

I'm also a vampire. I was born and raised into vampirism. I was thrown out at a early young age from my family and everything by some wicked church people, satan worshippers or something. All I remember is I've been into it since I was born. I speak about eleven or twelve languages when I'm drinking. Not really right now. With the cancer setting in right now because of the heat and everything, just kinda like can't think right now. Plus I could use, I probably do better when I'm on my vodka. But I've been trying to cut that down too and start just drinking beer, smoke my weed and smoking my cigarettes. Doing my own chemo. And I got a prescription for it, somewhere here in Manhattan. I just gotta go pick it up, if I could remember where the address is. I'm thirty seven. I'm not crazy. I'm not insane. I'm not stupid.