"I didn't choose to be homeless and to live the way I live." 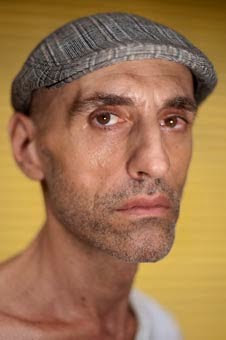 I was born and raised in Italy. I grew up in a very poor depressed area in the outskirts of Milano. We were me, my three brothers, my mother, my father. A lot of fights in the family. A lot of problems. Then went to art school over there. Start working in Milano as a graphic designer. Painting on the side and at the age of twenty eight decided to come to New York. I had what you could call a middle upper class lifestyle. I was married with a British woman for three years. We were living on fourth avenue between eleventh and twelfth in a luxury apartment. Both hard good, make good money. Everything was going well. Then we, I befriended with a guy that introduced me to heroin. I never done drugs before then. I never even smoked pot. And I started using heroin. And slowly it became an addiction. And slowly I started losing jobs. And then little by little I became homeless and here I am.

I think it was a coping mechanism. I was, even though I had money and a pretty comfortable life, I felt a void. Something was lacking. I didn't know what it was but I thought heroin was gonna fill the void. Was gonna like help me. Fill the emptiness. Obviously I was wrong. It's been a nightmare for me. It's like a demon. It took everything from me. It took everything. Material things but also destroyed my soul. But not my hope. I still have hopes in my life. That I'll be able to stop using and restart working and functioning and put everything behind my back. It really taught me a lot of things. I think I grew from the experience. It gave me a a chance to know myself more. But the price that I paid was defiantly too high for what I got in exchange. More insight. I got more experiences that on a conventional level they're awful like homeless, poverty. But for some reason I feel enriched. It's hard to put into words. It's more like an awareness about me and the world that before I didn't have because I had a very sheltered life and kind of a boring life. I was a nine to fiver. I used to get up. Go to work and go to restaurants and buy clothes. Be able to pay rent. But there was always this lack, this void I needed to fill and I didn't know how. For some reason heroin gave me the chance to be more introspective.

I believe for most of the people on crusty row it's a choice and for me it's not a choice. It's consequences of my addiction but I didn't choose to be homeless and to live the way I live. It just went out of control. I burned a lot of bridges. I feel very lonely. My friends that know me don't want to be around me anymore. Lost my family. My girlfriend. I have two babies. Wonderful babies. Nine months old. Twin brothers. I can't provide for them. I can't really be there for them right now. It's very painful.

I sleep on the streets. In front of a school. There is a gate that is opened. It's unlocked. I open the gate. I put my cardboard there and lay there. Wakeup at six in the morning. Try to find money for coffee. Either find money for heroin but recently I stay away from heroin and pretty much on medication foe Suboxone, that allows me to not get sick so sometimes I just try to eat whatever I can find. Either go to a church or eat from like organizations that come to the park and give food to the homeless people. Sometimes I don't even eat for two or three days. I walk a lot. I'm very restless. Go to see art shows. Sometimes I go to the bookstore. I try to keep myself busy. I read a lot. Think a lot. I'm not sure what I'm going to do. I'm pretty much waiting for some kind of miracle to happen. I still think I can save myself. I don't consider myself completely self destructive. Even though some people think if you're a heroin addict you're automatically self destructive.