"I've had bulls come into the spots cause kids were fucking idiots." 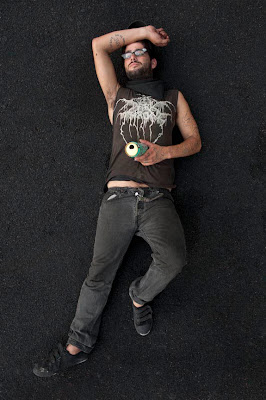 A lot of people look at us like you know we're scumbags and shit but what brings respect is that people like you, you come and see us as humans. You take our picture but it's not just like taking our picture it's actually showing who we are and what we do. We're not horrible people all I do is make my little money. I get drunk, you know, I eat bad food. I don't bother anybody, I'm not a violent person. I just, I do what I do to survive. And this is the lifestyle that I've been around for a long time. This is all I know how to do and it makes me happy.

I'm really a loner pretty much. I have a few select friends and shit but like the general population I've got so jaded to them that it's just like I don't, I don't, I don't want that. I've done the apartment, I've done the housing situation, I've had a girl, I have a kid. You know thats just not for me. I've been doing this shit since I was a young young teenager and I found this lifestyle, I've found a whole new family out here and they've taken care of me. They've treated me with respect, you know they gave me the love that my family didn't. So, what I do is I travel you know. I consider that making the best of the situation that I'm in. You know, I'm actually out there doing something.

New places, new people. I consider myself more of a person who experiences more than any of these yuppies that work nine to five that don't do anything with their lives except for work in that rat race. I take that rat race and I push it aside and say you know what? I'm free to do what I want to do. I'm not held by any boundaries. People tell me all the time, oh why don't you get a fucking job. Why don't you live in my shoes for a few days, you know? Its uh, it's a hit or miss situation with me but you know what? I have bad times and I'm gonna have bad times. I expect me to go through a field of shit to get where I'm at, you know. I have a lot of friends who died, a lot of friends who disappear. Like, it's all bullshit man. I have been traveling for a long time and this is the worst year I've ever travelled cause there's so many new people there's uh theres people that ruin it for a lot of people like me. I've been doing this for a long time so these new batches of kids who think they gotta be the hardest, baddest guy out here, you know they try to prove themselves in some weird sense and then they ruin it for people like us, they blow places up; like I go to hop a train in a yard and I go into like secret little jungle spots where I wait for the train and shit, and I've had bulls come into the spots cause kids were fucking idiots. And they ruin it, you know, they ruin places like that. I've been doing this for years, I come back this year on the road, I've got pulled off trains, you know I've gotten harassed a lot more, I cant make money really you know. It's uh, it's just uh, it's really destroying everything that I'm about man. It's such a downfall. I consider myself a dinosaur of this situation. I'm a dying breed. When I was younger, I had to fight for my spot in this food chain, cause without that, I'd just be walked all over. I'd be you know, it just wouldn't work man.

You know, I try to make the best of the situation. People have problems. Everyone has problems no matter who you are there's some sort of problem your'e going through. And just, I take those feelings, you know, i put them aside because my life is gonna be too short to deal with that. You know, I don't need that stress, I don't need any of that drama. A lot of times I travel by myself because, you know, I don't like people a lot. Cause people annoy me generally. I have a few good friends now, that have my back. Other than that, I'm just so tired of a lot of shit man. That's why I'm leaving town tomorrow. I'm outta here. And Dio's dead; that's a bad thing.

I just, I've been coming to this park for many many many years. And I've I just progressively see it downgrading and downgrading and downgrading. Like you know I travel the country and I go to my spots that I have and people have gone there and they just destroy it for me. They destroy it for people like me who actually need this, who uh you know are my good friends who've been doing this a long time. You know like I was in Chicago, there's a place, there's this yard, and they have this little jungle and I was just sitting there in the jungle and uh the train police, the railroad cops, they came into the jungle, which is supposed to be like our little secret spot you know. And I've been pulled of the trains like seven times in this past seven months. I'm getting really tired of it. It's my birthday you know, I'm gonna get fucking hammered drunk, have a good time, you know, and then tomorrow morning I'm going.