"I did the best that I could to kill that fucker." 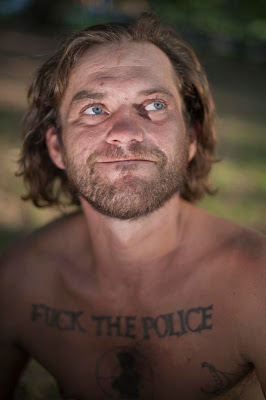 I've been busted drinking a bunch of times in every state except none of that Puerto Rico shit yet. I was beating the shit out of some mother fucker. They're trying to tell me it's manslaughter. I was getting kicked in Portland, Oregon. I didn't appreciate that. I don't kick nobody. I put that nigger on the table. I did the best that I could to kill that fucker. Turned out to be a child molester. I found that out on Christmas. I was fucked up. I'm a good guy now. All I do is drink.

I got this. I did ninety three days in prison in Oregon State Penitentiary. They seen me, I got into a big, there was a muscle car show. I go out there and I'm fucking, "yeah I got this new tattoo." I went to jail for that shit, dead beat, bum fighting whino. Anyway the mother fuckers seen me, "oh you little mother fucker, come here or we'll start shooting the guns. We ain't playing handball. You ain't nothing special." They gave me ninety three days in the hole where the sun don't ever shine. In the pines, in the pines where the sun don't ever shine.