"He was in the Marines and he kinda went crazy." 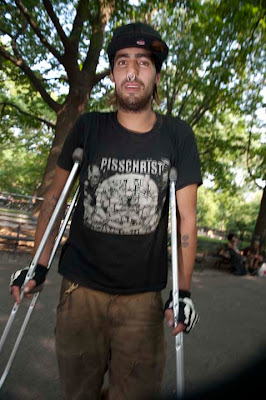 I was born and raised in Long Beach, California. I've been squatting and traveling since I've been thirteen years old. I'm twenty four now. The reason why I started squatting and I was on the street is because what happened was you know my dad was a really bad person. He was in the Marines and he kinda went crazy. He was a Vietnam veteran and he treated my mom like shit. He would beat her, call her a whore. Tell her that she's a bad person. Just do anything to manipulate her and make her sad and stuff. Fuck with her head and make her feel like she's a low down piece of shit. Lower her self esteem so he could have her wrapped around his finger. One day he just ditched out when I was nine. Me and my twin sister were nine. My younger brother was seven. And my mom went crazy. She found an email, emails from this Japanese lady who I guess my dad was having sex with, cheating on my mom with. And apparently he moved in with her and wound up marrying her. My mom got crazy and got really suicidal. One day I got home from school and she slit her arms all the way down, all the way up her arm and was laying naked in the bathtub when I came home from elementary school. So I dragged her out right and put her in the hallway and I called the cops, you know I called the ambulance and they came and they picked her up. The cops informed me because this wasn't the first time she attempted to do this, they told me they were going to institutionalize her. They told me and my twin sister and younger brother that they want to put us in a foster family. Separate foster families and I wasn't having it. I told them you know can I take a breather, take a walk. They said sure and I ran, ran away.