"Fucking take a dog from a homeless person that has nobody else besides the dog." 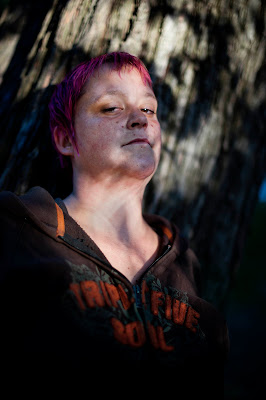 We found a cool spot that we could go to sleep in. We didn't think anybody would bother us. I did notice some apartments, somebody might say something, it was late and lets just chill out, whatever. So we'll just go to sleep, drink a beer or two and go to sleep. I had my dog. About 9th and 2nd, 3rd. A construction site. I didn't see any signs, but they said it was off limits, no trespassing. There were no signs around there. Cops fucking came. Someone saw us from an apartment. That's what I'm assuming. And they called the cops. Me and my friend and my dog got fucking arrested. They made me put the dog in the back of the fucking cop car. They took the dog off separately. It was ridiculous. Fucking crazy man. Fucking crazy. Fucking take a dog from a homeless person that has nobody else besides the dog.