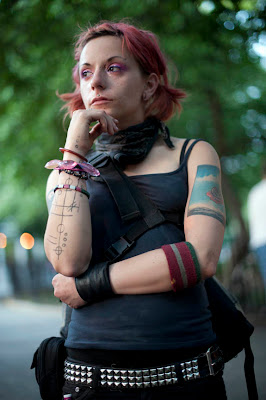 I've been in New York City for like two or so years now. I came here with my husband. We came here to stop traveling and get our shit together and get off the street. We've pretty much been living on the street here the whole time. I mean we had a couple of places but that obviously did not work out. Don't plan on traveling again really unless it's out of the country. Because everywhere is pretty much the same. Pretty much been everywhere and everywhere sucks. About equally.

Just picked here because it has more resources. Its a good place to make it if you are good at whatever you do and you bust your ass at it. We're both good at what we do. Just don't have the busting ass down yet.

I like it out here. It's all right. It's kinda becoming a police state like little by little. More and more. So that's like the worst part about this city is that aspect of it. And the fact that there's so many fucking people around all the time.

I do like the city. It just kind of seems that all the people that move here from other states and other cities you know they like New York City but they don't like all the things that makes up New York City. They want to live here because it's a cool place to live but they don't want all the homeless people and the graffiti and the this and the that. That's what makes this place what it is. That's kinda what New York is about. If you don't like it then why the fuck are you living here. That's why the city has changed a lot and it kinda isn't my favorite place to be anymore. It kinda sucks now because everyone that moved here like some rich Yuppie asshole wants to turn it into whatever you know suburb they were from but still live in New York at the same time. I don't understand why they don't just move to fucking LA if that's the case.