"Most of society treats me and my friends like shit." 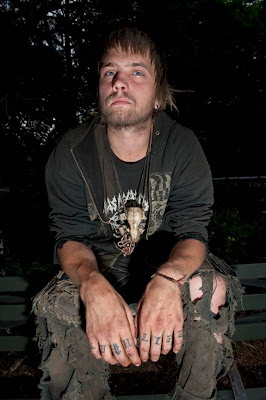 I ride fright trains. Travel around. Gone to pretty much every state in the United States. I like getting drunk with my friends. That's why I do it.

I've seen a lot of fucking crazy shit. One of the scariest things that ever happened was I was riding the suicide one time. It's like a train that doesn't have any fucking floor. So it's like you're just sitting on beams. I was jumping from one beam to the other beam and I fell through the fucking train and I caught myself with my arms and the train like fucking pulled me along the tracks and it like pulled my shoes off and my socks off and I finally pulled myself back up but I almost wasn't able to. I almost broke my leg. I had to hop off that train barefoot.

Hippies suck. Maybe hippies back in the day were bad ass but hippies now a day suck. The culture is just fucking retarded. Completely washed out. Everything that hippies stood for and believed in used to be all right you know kind of like a revolutionary sort of thing. Now it's just about fucking bullshit, basically. I don't know what the hippies are about. I don't hang out with hippies. It's not just hippies I dislike, it's pretty much everybody.

People are afraid to talk to me which makes me kinda dislike a lot of people. Cause of the way I look. Who knows? There's a million different reasons. Just cause I'm homeless. Just because you can obviously tell can tell I haven't fucking showered. It trips people out you know. It's a different aspect of society. A lot of people aren't comfortable with cause they don't understand it. No I didn't understand it. I just started doing it however long ago and like the first time I was homeless was when I was seventeen. It was a completely different fucking lifestyle. I was completely in shock at first. I realized how much potential it has for freedom. That's why I continue doing it. That's why I do it now.

Yeah that's probably the main three. Addiction, lonliness, hatred. Because I'm happy even if I hate and I'm lonely and addicted. I'm still happy with it. I'm ok with the way I am. I don't hate people because who they are. I hate people because of the way they treat me. Most of society treats me and my friends like shit.