"That was the only time I ever been shanked or stabbed." 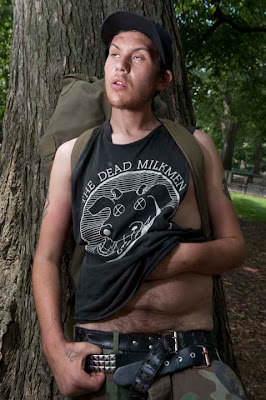 I'm from Detroit and this story happened in Detroit, First of all Detroit is not like New York. It's all ghetto. It's straight ghetto. I was about seventeen when this happened to me, maybe eighteen. I came into this known drug area. It's called the little Compton Junior. I went into this dope house and I had thirty bucks. I did one bag and I had two in my pocket. Before I came in there I saw these crackhead looking guys kinda staring me down. And I was like what the fucks up with this. But I was like whatever. Should be all right. So now I go down there. I do it. Come out. And all of a sudden I'm being circled by two guys. They're like, "give me all your money, give me all your money." I'm like, "dude , you just saw me go in there. I don't have anything." All of of a sudden I feel this sharp pain right here. I don't even think it was a knife. It looks too jagged to be a knife. I just felt that out of nowhere. It didn't really hurt. It more like burned. The next thing I know is I'm on the ground and I felt the guy go through my pockets real quick. I don't know if he grabbed the bag or not but I had two bags on me and I ended up with only one, so I don't know if they took it or not or whatever. So I get up and I'm walking down the street and every thing is kinda going in and out, in and out. All I'm thinking about now is I'm gonna die, I'm gonna die. And then the police come up and they say, "white boy, you walk your ass up eight mile." And I was like , "dude I'm gonna die." And they're like, "you shouldn't be here." And they actually made me cross eight mile which is a big road, into Ferndale and as soon as I got there, there was a gas station right on the corner. Soon as I got there, I just passed out. I don't really remember anything else. That was the only time I ever been shanked or stabbed. I never been shot. I've been beat up. That was pretty intense you know. I wanna kill those guys but I don't know where they are.