"They beat her to death with pipes and bottles." 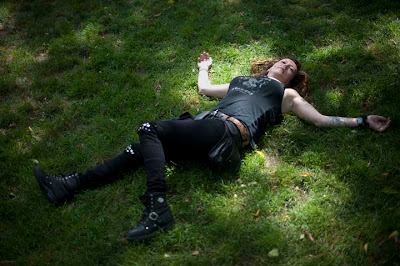 I've been around here forever. Before the riots. I know all this kids forever. I'm getting ready to marry one of them who is in Rikers right now. About three weeks ago, it was May seventeenth at two forty eight in the afternoon. Me and Tinnon were walking down twelfth street to go to my friends house. Yeah we were making out and we were a little bit intoxicated. He had me pinned on a car and I had my leg wrapped around him and we were making out. And these kids come up. They're like, Rip her shirt down, rip her shirt down." He's like, back up, back up. Get away from us. Leave us alone man." Then the guy went to grab my iPod and I was like, get your hands off my shit." I pulled it out of his hand and that's when the first punch came. And then they just started wailing on us. He's like, "get off of her, get off of her." A couple of guys pulled him away. And then the other guys kept coming around and kicking me. And they attacked me with a pit bull and that's where the pit bulls fang marks are on my fucking boot. There's teeth marks. I have a bite mark on my inner thigh from one of them biting me on my leg. Not the dog but one of the kids. Three or four cops arrived and said, "you're under arrest."

I'm tired of these kids thinking they can go around and pick on us just because we're homeless and we're crusties. They think they can take our shit. They've been doing it for years. They killed my roommate last year, a girl I've know since she was fifteen years old. They beat her to death with pipes and bottles. And I had to find her dead on our living room floor. These are the same kids. They fuck with us every year.