"We all decided that we would help her eat the dog's heart." 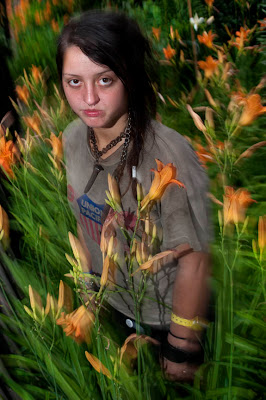 My friend had this dog and it was like a little puppy and his name was Grandpa and he probably was only like four months old and then um she ended up putting the dog, she was getting a ride back to where we were staying like this collective house in Utah and she puts the dog in the back of the truck and he fell out of the truck and his leash got stuck and the dog died and we didn't know what to do about it so we woke up in the morning and asked her what should we do with your dog. We need to do something, so should we bury it? She decided she wanted to take all of the bones out of the dog and have the dog's fur and its bones and everything so we ended up having to gut this dog so she could have the bones and the fur. Pretty much there was a dog heart and she was like, "so what should I do with this dog heart?" And someone said, "well you can eat it." And she goes, "well should I cook it?" And they were, "no just eat it, you're fine, it's fresh." So we all decided that we would help her eat the dog's heart because we weren't going to sit there and watch her eat it all by herself, you know. So we ended up like having spin in a circle around just like this dog's heart and we all like ate it. Disgusting. It was chewy and crunchy. It was the roughest, grossest thing. We all had blood down our face. It was really gross. Then she wanted the dogs blood on top of it, so she decided she was going to cover herself in the dog's blood, like saved his bones. We were like on this train, on the gondola and she was like trying to tan his fur on the gondola cause it was sunny, so she could keep the fur and it would be fresh. Probably for two weeks we all smelled like dead dog.