I modeled when I was very young. I have a bunch of pictures of like me in catalogs, in like Easter catalogs and Macy's ads and magazines and stuff. No not really. Cause I feel so awkward doing it. A long time ago. Like fifteen maybe. Not even probably. Fourteen maybe. I mean I like the pictures sometimes. I feel very scrutinized. Yeah, no I have money for my college fund. I have not touched my college fund. I'm living in the park and I'm not touching my college fund. Go figure right.

I just want to be myself and sell cool stuff. Chill. My philosophy is to do what feels rights. 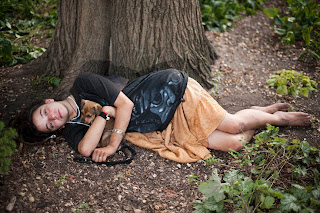 I'm not well versed in names of artists so much. I like Dali and the surrealist shit. That's badass. Let's think. A lot of weird shit happens to me. No like when you're tripping and like you don't ask anybody for money or anything and you end up with thirty five dollars in your pocket. That's like really cool cause everything clicks together. People just hand us money. And we don't even ask anybody. Maybe they just felt the vibe. Quote, unquote, vibe thing.

I've slept over there. I've slept at the beach lately. We squat usually. We find something.

About not being completely reckless about everything, I guess. Because I have a puppy, so I can't. Reckless. And I'm never really reckless anyway. I think I'll always be the one like, no guys, lets not do this whatever. Unless I'm drunk and I might do it myself, but then I'll get the fuck outta there. Like if we're trying to do something. Like slide down a cellar and get some beer and climb back up. Like stupid shit. But if I have a puppy I'm not trying to do stupid shit. I wouldn't want to get locked up. So she's gonna put my at my best behavior. She doesn't have a name yet. Just calling her Baby Girl for now.