"Used to be this dude who used to buy my socks." 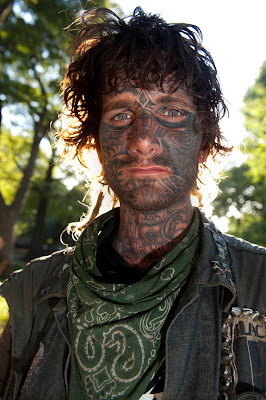 On the way to the beer store to get a beer. Hanging out in the park with my friends. Passing through New York for awhile. I'm pretty spontaneous. Like to travel. Freight trains of course. Where else, Greyhound? I like going through the Canadian Rockies on the trains. Like actually being on a freight train out in the middle of nowhere. Seeing bears.

I used to live in SanFrancisco. Used to be this dude who used to buy my socks. I dunno he liked really smelly dirty feet. I thought that was really pretty freaky. I'm pretty freaky, out there on wild things, but he takes the cake. He would like smell them and stuff.

I don't like stores here in Manhattan. Their just like way too expensive. Like just a beer. Three bucks for a forty, that's ridiculous. Usually no more then like two fifty at the most. I say fifty cents matters for sure. I like other stuff, the Four Loko cause it's a little bit higher alcohol percentage. Its got caffeine in it. It keeps you up and gets you a good little buzz on. It's like an actual like super good drink. But it only like appeals to like I imagine poverty stricken people of our nation.

I mostly have a routine. I like panhandle out in Queens to make money. Then go do what I do. Then I go to sleep in Brooklyn. So I just kinda like bypass Manhattan. I'd rather be kicking it here everyday. It's just like everyday I forced to make money to do the things that I do. Anywhere from like a hundred and five to a hundred and thirty five. Sometimes it's like good right here in midtown, but it's just the cops are such fucking assholes. They'll take you to jail for unlawful soliciting. Different little technical rules. Things that should just be like a ticket, they'll take you to actual jail. You know what I mean? Central bookings.

They either love them or hate them. They think I'm brave. This or that. And then you have those people that are redneck. "What are you trying to make yourself black?" Or "that's real stupid." "Why would anybody want to do that?" Or think it's satanic or something. You know everybody's different. It's kinda like asshole repellant. It keeps away all the assholes and it just attracts good people. I'm used to the stares now. Is that real everyday or did that hurt? The same questions everyday.