"You know I want the wife, the kids, BMW, the whole story." 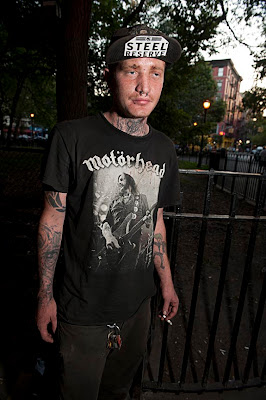 I got a forty smashed over my face. Last night. Basically a chick started calling me out saying, I was some sort of dumb ass saying I'm full of shit. So I said something I should not have said and I deserved a forty but she had no reason to cut off my dreads. With scissors. I thought she was pulling my hair. I stood and took it like a homeboy. She kicked me in the face. Smashed a forty over my head. Gave me a few punches. You know I'm not gonna hit a homegirl.

Why am I still sitting here with Hep C. Fuck Hep C. I'll answer my own question. I was a dumb ass. Because I was with this girl and some process of mixing up the needles, she told me she had Hep C. At the time, like whatever, we fuck unprotected all the time, you know; what does it matter. Come to find out later that it's really not sexually transmittable but I didn't find out that till later. So I gave out my own damn self Hep C. I got it from her but it's my own damn fault. I gave it to myself.

Me and homegirl split up. I came out east. I potentially got a job being a bartender here. Hopefully I'm not in this shit hole no more. Hopefully I'll get my life together. You know I want the wife, the kids, BMW, the whole story. That's what I want. I don't want this dumb shit. Straight up fucker. If I was giving advise to anybody it would be don't be as dumb as I've been.